Approaching the Qur’án is a major event in religious publishing. Professor Michael Sells has captured the complexity, power, and poetry of the early suras of the Qur’án, the sacred scripture of Islam. In this second edition, Sells introduces important new translations of suras and a new preface that addresses the ongoing controversy over teaching about Islam and the Qur’an in American universities. Approaching the Qur’án presents brilliant translations of the short, hymnic suras associated with the first revelations to the Prophet Muhammad. Most of these early revelations appear at the end of text and are commonly reached only by the most resolute reader of existing English translations. These suras contain some of the most powerful, prophetic and revelatory passages in religious history. They offer the vision of a meaningful and just life that anchors the religion of one-fifth of the world’s inhabitants. Approaching the Qur'án is enriched by inclusion of free downloadable audio recordings of Quranic reciters, allowing readers an opportunity to hear the Qur'án in its original form. The book includes Sells’ Introduction to the Qur’án, commentaries of the suras, a glossary of technical terms, and chapters discussing the sound nature and gender aspects of the Arabic text. 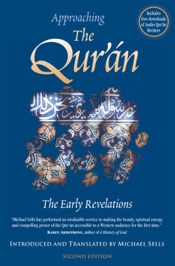 Moneyball: The Art of Winning an Unfair Game An Irish Hostage An Unexpected Home Hard Knocks: An Ultimate Novella Joshua Weissman: An Unapologetic Cookbook A Leaf on the Wind of All Hallows: An Outlander Novella Minecraft: Battle of Legends Book 1 (An Unofficial Minecraft Book) An Unlikely Setup 20 Things I've Learned as an Entrepreneur The Qur'an & Modern Science
Poppular books Tom Clancy Target Acquired Strict Confidence In Order to Live Legacy The Herbal Kitchen Pain Free Golden Girl Live Your Life A Court of Thorns and Roses Atomic Habits The Last Thing He Told Me The Virgin Game Plan A Court of Wings and Ruin Love for Beginners A Court of Silver Flames From Blood and Ash